The cast of “Not Working” rehearsing a song.(Courtesy of Asian Story Theater)

Asian Story Theater, Teatro Mascara Magica and San Diego Black Ensemble Theatre are the COVID-themed musical’s co-producers
BY PAM KRAGEN
OCT. 28, 2022 5 AM PT  San Diego Union Tribune
In March 2020, Asian Story Theater was in final rehearsals for its play with music “The Golden Rule” when the pandemic hit, idling the company for what they hoped would only be a few weeks.
But as the weeks turned into months, AST producer Kent Brisby started talking with his colleagues — Gingerlily Lowe from AST, William Virchis from Teatro Máscara Mágica and Rhys Green from San Diego Black Ensemble Theatre — about find a way to use their downtime creatively.
The result is the coproduction “Not Working,” a musical making its world premiere tonight in San Ysidro.
The hourlong musical touches on many topics, including the pandemic, its impact on people’s livelihoods, immigrant families separated after crossing the border and deported, anti-Asian attacks, the aftermath of the murder of George Floyd.
The title of “Not Working” was inspired by the 1974 Tina Faso and Stephen Schwartz musical revue “Working,” which is a series of vignettes and songs about Americans and their relationship with their jobs.
“Not Working” features a script by Brisby and 15 songs written by many songwriters and songwriting teams. They are: AJ Rafael, Howard Ho, Luis Aragon, Creative Spés, Antonio TJ Johnson, Gingerlily Lowe, Marc Macalintal, Leonard Patton, DaJahn Blevins, Raya Heart Pearson, Annabelle Ramos and Dave Scott.
Unlike the scriptless “Working,” “Not Working” has a narrative story with characters.
“'(‘Working’) was a template,” Brisby said. “A significant change is that we decided that we didn’t want to do a simple revue, but rather something with a narrative that complemented and reinforced the individual experiences and songs we might gather from different communities.” 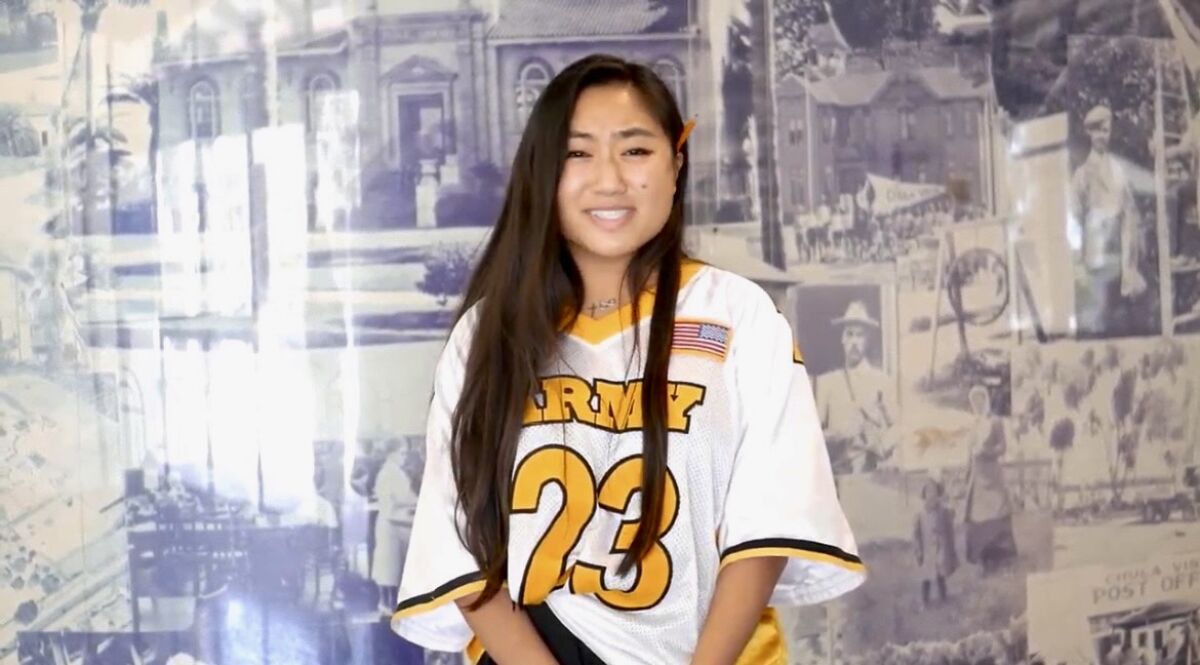 Annabelle Ramos plays Anqa, the lead character in “Not Working.”(Courtesy of Asian Story Theater)
The musical’s main character is Anqa, a young woman who was born in the U.S. to immigrant parents, but when they were deported, she went with them. At 18, Anqa flies back alone to the U.S. to claim her citizenship and make a new life, but she arrives just as the pandemic hits and it throws her life into chaos. Against the backdrop of COVID deaths, mass unemployment, closed borders, political strife and racial turmoil, she leans on her diverse group of friends to find her way.
Brisby said it was important to the “Not Working” creative team that Anqa’s ethnicity is never mentioned, so her experience reflects that of the vast melting pot of immigrants in the U.S.
“We looked at a consequences for a lot of communities who were being deported or coming to America and experiencing a welcome, or lack of welcome, when they arrive,” he said.
The production will be presented over three weekends, with a new location each weekend. Each performance will be followed by a moderated panel discussion on all of the topics addressed in the musical. The full list of discussion topics is online at asianstorytheater.org.
Brisby said he hopes the experience audiences take away from “Not Working” is seeing the pandemic and its aftermath through someone else’s eyes.
“Even if you care deeply and were touched personally, you’ll see other people who were just as impacted in different ways. There’s great intellectual importance in looking at different perspectives,” Brisby said.‘Not Working’
When: Opens tonight and runs through Nov. 13. 7:30 p.m. Fridays. 2 and 7:30 p.m. Saturdays. 2 p.m. Sundays (except closing weekend, when performances will be at 11 a.m. and 2 p.m. Nov. 12 and 2 p.m. Nov. 13)
Where: Tonight through Sunday at El Salon Theatre, 114 W. Hall, San Ysidro. Nov. 4-6, Diversionary Theatre, 4545 Park Blvd., San Diego. Nov. 12-13 at Chula Vista Library, 565 F St., Chula Vista